Get the updated ISL Light for Android

Android users, you will be happy to hear that a recently updated remote desktop app ISL Light 3.0.1 for Android awaits you on Google Play. You are welcome to get the update, which resolves a few frequently reported bug fixes, for free.

Please find a detailed description about the release in the Release Notes.

If you’re new to the ISL Light Android app, here are a few tips to get you started.

How to share screen on Android
Once connected, screen sharing on Android starts automatically. Getting there, however, requires a few simple steps. 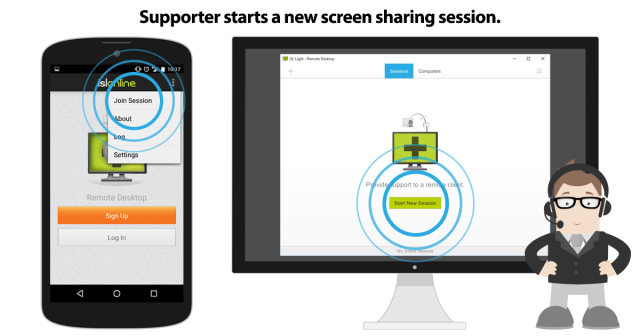 • Session code
When the supporter is given a unique session code, he passes it to the mobile user, which he types in and taps on ‘Join Session’ to connect. 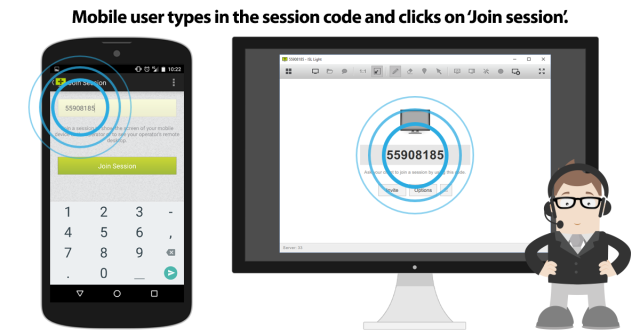 • Text chatting throughout support
They can easily put down the phone when connected, as ISL Light also enables two-way communication with user-friendly text chatting.

Pop-up notifications will keep informing the mobile user of the coming chat content even when they browse away from the ISL Light app.

• Screen sharing and remote control
Assisting Samsung mobile devices (available on Android 4.2.2 and newer), the operator can control the mobile device from their own device and fix the problems efficiently by himself / herself (See video on How to control a remote Samsung phone). However, assisting non-Samsung Android mobile devices (available on Android 5.x and newer), operators can use real-time screen sharing accompanied with visual pointers.

Screen sharing starts automatically when connected, enabling the supporter to see on the remote Android screen. Nevertheless, the first-time mobile user needs to confirm ISL Light’s screen capturing in order to stream the screen to the supporter, but once confirmed, the pop-up will never appear again.

• Visual pointers
Sending the mobile user visual clues about what to tap on or where to look even further facilitates remote support of the mobile device. To add a visual pointer, the supporter clicks on a shared screen, making a hand cursor to show up for about two seconds in the same spot on the remote Android.

• Portrait and landscape
Some applications look and work better in landscape mode and some in portrait. ISL Light enables both, so encourage the Android user to switch freely between them.

• Closing remote access
To end the remote access session, either the supporter or the mobile user can simply click on the obvious ‘X’ button and stop all remote sharing processes. Although the ISL Light app will remain installed on the mobile device (How to uninstall), the supporter will not be able to access it again without having to repeat the first two steps together with the mobile user – start the application and confirm the session code. 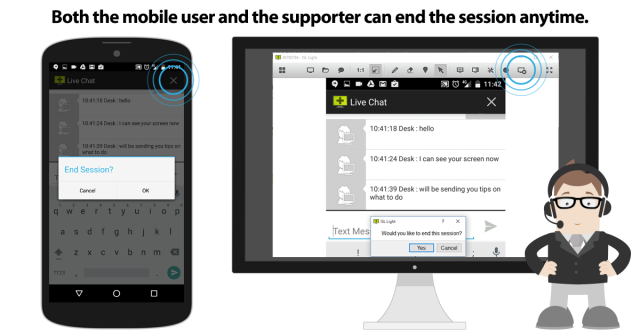 You and your mobile clients are welcome to get the latest remote desktop app ISL Light for Android 3.0.1 from Google Play.

1 Response to Get the updated ISL Light for Android